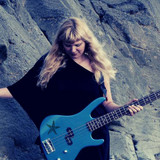 Marianne Holland is a multi-Genre Singer/Songwriter based in North Wales. To date In September 2015,

Marianne released her debut 4 track EP called A Place Unholy. in February 2016, a collaboration with 4th Eden and Lamara-Marie was released as a single called Our Last Breath. In April 2017 she released The Barren Lands EP. This is post-apocalyptic concept EP which is also available as a special edition with narration as when she performs it live.