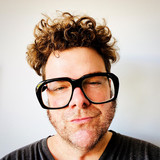 From rock to power pop to garage to acoustic, Hoy's released over 30 albums and singles under almost as many names (The Royal Panics, Greg Hoy + The Boys, Hoy, Twice As Bright). His songwriting has been called 'impressive, accomplished indie pop that touches on a wide spectrum of sounds' [Splendid] with 'an excellent voice that's a perfect fit for the tunes he writes' [babysue].

About the heavier stuff, Jack at The Big Takeover says it's about 'big guitars/big riffs/big tunes that prize early Kinks and Who discs' but there's a lot of infectious melody to go around no matter what genre Hoy's shape-shifting into next. Loretta Sweet / SweetSweetSweet