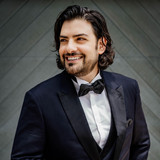 Voted into the top ten of a „new generation of rising stars“ and hailed for his „golden“ voice by Opera Now Magazine, Ilker Arcayürek is the winner of the 2016 International Art Song Competition of Stuttgart’s Hugo Wolf Academy. He was finalist of the BBC Cardiff Singer of the World Competition 2015 and has been selected a BBC Radio 3 New Generation Artists through 2017. He makes his highly anticipated Wigmore Hall recital debut featuring lieder by Schubert and Schumann in fall 2016. Since the 2015-16 season, Ilker Arcayürek has been a member of the ensemble of the Staatstheater Nürnberg. In Nürnberg his repertoire includes Rodolfo in La Bohème, Don Ottavio in Don Giovanni, Nadir in Les pêcheurs de Perles and Andres in Wozzeck – the latter slated for spring 2017. In Spring 2016 he made his stage debut at Teatro Real in Madrid as Claudio in Wagner's Das Liebesverbot staged by Kasper Holten under the baton of Ivor Bolton. Recent performances have also included Basilio and Don Curzio in Le Nozze di Figaro at the Verbier Festival with Paul McCreesh conducting as well as the Son in Hossam Mahmoud’s Tahrir at the Salzburger Landestheater conducted by Mirga Gražinytė-Tyla. With a broad repertoire of oratorio and concert works, Ilker Arcayürek regulary appears on the concert stage. The season 2016-17 marks his debut at the Concertgebouw Amsterdam and in Utrecht as soloist in Schubert’s Mass No. 5 and Mozart’s Litaniae de venerabili altaris sacramento with the Netherlands Radio Philharmonic Orchestra and Frieder Bernius as well as at the Dresdner Kreuzkirche as Evangelist in St. Matthew’s Passion with the Dresdner Kreuzchor and the Dresdner Philharmonie conducted by Roderich Kreile. Born in Istanbul, Ilker Arcayürek grew up in Vienna. As soloist with the Mozart Boy’ Choir he gained first experiences on international stages touring overseas as well as in joint performances at Vienna’s Staatsoper, Volksoper and Kammeroper. He became a member of the Arnold Schönberg Choir and studied with Sead Buljubasic in Vienna. He participated in master classes with Thomas Quasthoff, Ileana Cotrubas, Sir Thomas Allen and Alfred Brendel. He joined the opera studio at Zürich Opera in 2010 performing in productions amongstothersof Rossini’sOtello(Gondoliere),Cosìfantutte(Ferrando)andFromtheHouse of the Dead (Aljeja). As member of the ensemble of the Stadttheater Klagenfurt in the 2013-14 season, he appeared as Italian Singer in Der Rosenkavalier, Malcolm in Macbeth, The Prince in The Love for Three Oranges, Alfred in Die Fledermaus and Tamino in Die Zauberflöte.