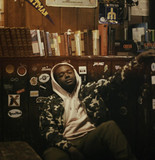 Choirboui.com Coming from a family of church choir singers in Tacoma, WA, DeeJ adopted his love of music at a very young age and spent his school years in multiple choirs where he could learn more about musical theory, musical history, and expand on his own vocal talent.   DeeJ introduced himself to the music scene in 2019 with his introductory track, ‘Choir Boui’, on his first studio project, ‘Hard Headed’. This track (and ‘Hard Headed’ as a whole) is a small representation of DeeJ’s diverse lyricism and musical prowess, various writing methods, cadences, and styles of singing to display the dynamics within his sound. Learning and inspiration passed down to him through the top artists of his generation, DeeJ’s sound is in the vein of hip-hop music and new-school R&B with an island vibe. Multi-layered tracks, control over the beat and his voice, and a history of music gives DeeJ incredible precision in sharing his musical vision with his listeners, fans, and followers.   Today, DeeJ is using ‘Hard Headed’ as a first-step into his own musical career by building upon and exceeding beyond all of the sonic ideas he had set forth himself within his first project. His new EP, “Best Night Of My Life!!”, is a celebration of his growth as an artist by setting a new standard for his sound with entirely new flows and composition styles while upholding the integrity of his personal sound within three new songs. #MuchLove.