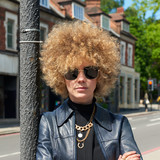 Noble’s sound is rooted in and influenced by her deep love for rare soul, funk and disco. Her passion and knowledge for music has only grown since moving to London 10 years ago and delving herself deep into the city’s underground soul scene where she began meeting like minded people who wanted to collaborate both creatively and musically. Noble went on to spend a couple of years as a backing vocalist for ‘New Street Adventure’ (Acid Jazz Records) and then went on to write with Lack of Afro (Freestyle / LOA Records), to release songs including ‘Fires Glow’ for ‘Hello Baby’ which was nominated as one of ‘BBC 6’s Albums of the year’ 2017. ‘Noble & Heath’ was then organically formed - the double decking, dynamic, female DJ duo, spinning the very best of all that the girls love musically, all off vinyl. N&H have spent the last few years DJing all over the UK & Europe, and have already graced the decks at places such as The Royal Albert Hall, XOYO, KOKO, The Jazz Cafe as well as many festivals. They also host their own radio show on Acid Jazz / Fred Perry’s newly formed radio station; ‘Totally Wired Radio’. This summer saw Emma Noble debut as a solo artist with her self-penned anthemic, soulful track “No Turning Back” to great acclaim from some of the UK’s most respected DJ’s and tastemakers. In August she came back with her anticipated follow-up single, ‘Woman Of The World’; her own take on a track from the lost 1972, Marvin Gaye album “You’re The Man”.