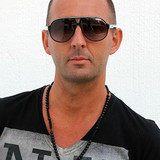 DJ B3LFAST is the creator of the biggest anthem of the Euro 2016 and of one of the biggest of the year: Will Grigg’s On Fire. Released in June, the song stormed the charts becoming one of the most downloaded tracks on iTunes all over Europe. In some countries DJ B3LFAST’s Will Grigg’s On Fire surpassed in the charts David Guetta’s official Euro 2016 hymn “This One’s For You” and has been sung everywhere. The song reached #3 on Spotify’s Global Viral Top 50 Chart, with more than 2 million plays. Many people have been wondering who DJ B3LFAST is. DJ B3LFAST is the alter ego of Grammy Nominated DJ/producer/composer/singer Ago Carollo, also known by his other monikers Spankox, Ago, X-Treme, Eyes Cream, Reloved and Tino Augusto DJ. He’s the creator of many dance hits that reached the top of the international charts: one of these is the famous To The Club by Spankox. With JXL and Paul Oakenfold he is one of the only three official Elvis Presley’s remixers and his remix of Baby Let’s Play House set Elvis back at the top of the world’s record sales charts. Ago Carollo is also the producer and composer of the soundtrack of the cult movie Miami II Ibiza – An Electronic Dance Music Journey, starring Carl Cox, Bob Sinclar, Tiësto and other world famous DJs. He recently received the official Nomination at the Latin Grammy Awards for his duet with Spanish superstar Miguel Bosé titled Wrong In The Right Way. Contact/bookings: info@everness.com