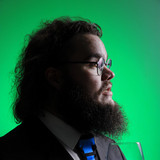 Lunar Holmen is the electronic hemisphere of the Finnish musician, Joonas Holmén. For Holmén, whose rock outlet Joonas Holmén + The Lossy Codecs has gathered a keen following after two well-appreciated LPs, the launch of this additional moniker marks a return to his roots. As an aspiring musician, he started out conjuring tunes in the realm of electronica, before going on to develop his trade in indie rock. On Lunar Holmen’s debut album, Kreissack (released on 21.05.2021), Holmén reunites with his first love, the synthesizer.

The backbone of his tunes can be traced to game music of the 80s/90s; His ears seem to be honed with the unashamedly naivistic, yet inventive compositions in games like Jazz Jackrabbit and Mega Man. But he exploits more modern devices, too: The shrewdly conceived melodic drama on top of a sophisticated, yet brutal, beat á la Basement Jaxx or Röyksopp, and the blocky sonic lexicon of the chiptune-revival. The shadows of his idols, Kraftwerk and Jean-Michel Jarre creep in as well. Namedropping, however, is misleading; Holmen has access to the mental resources of a true electro-tycoon. What is truly great about Kreissack, is that rather than a mere synthesis, a cocktail to be enjoyed in solitude by an electro-nerd, it provides to the reinventing of the electronic pop-tune that, perhaps, for the sake of becoming truly interesting, should be reinvented. - Oiva Ristimäki, Researcher, School of History, Culture and Arts Studies, Turku University