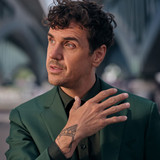 SEVEN is a thoroughbred funk and soul musician. He is a pioneer with soul in his blood and a unique voice of gold and funk in his feet. Ever since 2002 the entertainer released one album after the other and has been on tour, sung and / or collaborated with the likes of Destiny’s Child, Die Fantastischen Vier, Xavier Naidoo, Keith Crouch, Sheila E, Andreas Vollenweider, Talib Kweli, James Poyser, Pablo Nouvelle and many more. SEVENs live audience gets to enjoy a soul- and funk-filled spectacular, brimming with his unmistakable musical talents combined with the pure entertainment he always provides. The entertainer has been on the road with some of his band members for years now. This combination of trust, high-quality music and the huge enthusiasm the band has when playing together is something that his audiences can understand in a flash. It’s no surprise the soul singer played the likes of Montreux Jazz Festival, Sundance Festival and sells out a great range of clubs. The music is always the center of his creative work. For the production and recording of his albums he went to America, the UK, Germany - you name it. The past few years the artist took part of various musical projects such as the big TV show “Sing Meinen Song – das Tauschkonzert” with host Xavier Naidoo, entered number 1 on iTunes in Germany, Switzerland and Austria with his Best Of album, played countless concerts and received, inter alia, the Swiss Music Artist Award 2017.