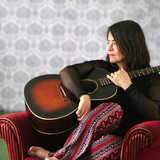 Jennifer Saxell began singing and writing songs as a young girl growing up in a musical family on Canada’s west coast. Since then her journey has taken her from honky-tonks to concert halls to recording studios – from Canada to her adopted country of Sweden. Her music is inspired by her North American roots, a combination of country, pop and rock with lyrics that are carefully crafted into clever poetry. She delivers these songs with a distinctive voice that is proud, sensual and saturated with intimacy. After the release of her critically acclaimed first album (Daisy Roulette), Jennifer began devoting more of her creative energy to her career as a visual artist, all the while still writing, writing, writing songs. Now, after this unexpectedly long sabbatical, she is returning to and focusing on music and she is back in fine form, to say the least. Her new single “Devil’s Radio” is the first from her upcoming album “Beautiful Sight” – which is slated for an early 2021 release. “It’s funny how life’s twists and turns can get in your way – I never consciously planned to take a break from my music career…it just happened. Now I see it was a blessing in disguise, a necessary pause, beyond my control. I’m back at it with such inspired enthusiasm now, I’ve matured as both a writer and a vocalist and I am cherishing every minute of it! Thank you all for listening and sharing. xo Jennifer.”