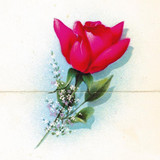 Augie March formed in 1996 in Melbourne, Australia, where guitarist/singer/songwriter Glenn Richards, guitarist Adam Donovan, and drummer David E. Williams were attending college. The three grew up together in Shepparton, Victoria, Australia, but it wasn't until they reunited as friends during their college days that Richards, an English major, began writing songs and invited the other two to accompany him. Both Donovan and Williams were studying music and the two sought out bassist Edmond Ammendola, with whom they'd worked in the music school, to complete the lineup. The quartet quickly began arranging the music and settled on a name borrowed from the 1954 novel The Adventures of Augie March by Saul Bellow, whose poetic, complex prose complemented Richards' own imaginative and descriptive lyrical style. Before long, Augie March attracted the ears of Ra Records, and in early 1998 the label released the EP Thanks for the Memes. Soon thereafter, Augie March released another EP, titled Waltz, and on the strength of the single "Asleep in Perfection," word about the band rapidly spread and BMG Australia courted the band with a recording contract. Augie March accepted and began work on their first full-length, in the meantime expanding to a quintet with the addition of keyboardist Rob Dawson. Sunset Studies was released in mid-2000 to excellent reviews and public support, hovering in the Australian music charts into 2001 while the band performed constantly in support. Sadly, Dawson was killed in an automobile accident on January 2, 2001, just a short year after his joining the group. The remaining four took some time to regroup from the tragedy, holed up together in an abandoned telephone company building, and began writing new material for the follow-up to Sunset Studies. They recruited keyboardist Kiernan Box and headed into the studio to put their new batch of songs to tape, which resulted in the majestic Strange Bird, released in Australia in 2002 and stateside on SpinArt in 2004. The band toured frequently before returning home to work on their third full-length, Moo, You Bloody Choir, but when its slated 2005 release was pushed back indefinitely, Richards took some time to cobble together a handful of lo-fi recordings, which he self-released under the moniker G.A. Richards & the Satanic Mills Bros. The EP was titled Closed Off, Cold & Bitter: Life as a Can of Beer. Moo, You Bloody Choir was finally released in Australia in 2006 and Augie March resumed touring to support its release. Jive/Zomba released it stateside in the summer of 2007. ~ Gregory McIntosh, Rovi