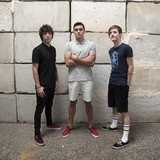 as a result of a previous musical project, formed by Jaume Jiménez: voice/guitar, Jose Monllor: bass/chorus and Bruno Ortin: drums. In 2016 we released our first self-produced album under the name “Don’t Keep Your Voice Down”, along with the music video for the single “Your Time Is Over”. At this moment, we taked the road and started our first tour rolling through all corners of Spain. Now in 2021,