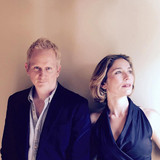 SWEET TALK RADIO was born out of a conversation. Kathrin Shorr and Tim Burlingame were two solo artists who came together by way of vocal harmonies and then, a kiss. The kiss that changed everything, started a relationship, and ultimately led to getting married and having a son. Along the way they've released three albums, five singles, had numerous song placements in tv shows, performed at various festivals, scored an independent film, and composed music for a daytime talk show. Their third album, "HOROLOGY", was recorded just after Kate's father passed away. The title is a tribute to her father, who owned a clock shop in Los Angeles. The first single from the album, "I'm Here", was featured on the acclaimed Netflix series, 'Alexa & Katie', and Sweet Talk Radio toured with both The Weepies and Glen Phillips in support of the album's release. 'With undeniable chemistry both on stage and off, STR create alternative-folk-pop songs full of depth and yearning, delivered with an earnest desire to connect.'  —Santa Barbara Independent