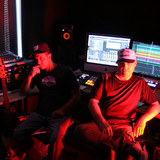 Full Circle: A Hip Hop production crew - Money J and Triple D ​Almost 30 years ago MCs Money J and Cash Tip formed Rock Always Productions with DJ Triple D. It was the late 1980s and performing live hip hop was still in its infancy. Even though we performed live regularly, there were only a handful of venues who catered for this new developing genre. ​ Fast forward to 2018 - We're no longer the children of hip hop, but we are the 1st generation of hip hop artists and fans. As we look at our collections of hip hop records, CDs, cassettes and MP3s we've both accumulated over the years, something has become very clear. And that is - what we hear of present day hip hop is mostly not for us. Hardly surprising after all this time. ​ So - very much like it was all those years ago, we decided to form Full Circle, to make the music we want to hear - hip hop made in Australia by our generation. We're also making sure that everyone knows who did what when, as no other West Australian hip hop group has members old enough to care to recognise the history that existed before them. ​