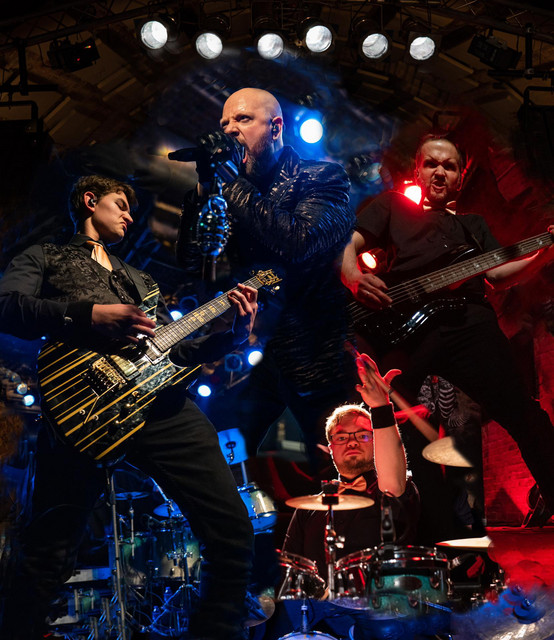 Regarded by many as the best-dressed metal band far and wide, M.I.GOD. from Nuremberg, Germany, strive for the ultimate musical delicacy: Just as a perfect long-drink consists of skillfully chosen ingredients in perfect balance, M.I.GOD. serve energetic Metal to bang your head and spin your well-groomed hair to, but in the twinkling of an eye make you sing along to ravishing hymn-like chorusses, crafted to raise goose bumps. Clean vocals with sporadic guttural accents meet a wall of sound of heavy guitars and drums - tastefully arranged, diverse, never dull and delivered on a high level of musicianship. Their current album Specters on Parade is a concept album meant to be enjoyed in one go, including short audio play sections and interludes, driving forward the framework story about fear, sadness and catharsis - including a very clever plot twist at the end. Fans of Queensrÿche's Operation: Mindcrime will immediately feel at home here, as well as fans of bands like Nevermore, Soilwork, Symphony X, Sevendust, Alter Bridge, Killswitch Engage and Meshuggah. Since the founding in 2001 the band has seen many line-ups and musical flavours, but sometimes good things need to mature like a fine whiskey. In February 2020, a successful Germany tour supporting A Life Divided kicked off a new chapter for M.I.GOD. with increased public presence.