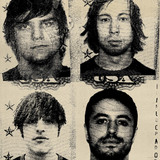 Boston-based emo-pop turned country-tinged pop outfit Boys Like Girls features singer/guitarist Martin Johnson, bassist Bryan Donahue, drummer John Keefe, and guitarist Paul DiGiovanni (the last two members being cousins). After Boys Like Girls posted several demo recordings online, the band's lively hooks and youthful enthusiasm had garnered them quite a following by 2005's end, while also catching the attention of industry players like booking agent Matt Galle (My Chemical Romance, Taking Back Sunday) and producer Matt Squire (Panic at the Disco, Northstar), both of whom contacted the band about working together. Following a national PureVolume-sponsored tour with Hit the Lights and A Thorn for Every Heart, Boys Like Girls entered the studio with Squire to record their debut album. The resulting self-titled effort appeared in August 2006 on Red Ink. Although initial sales were slow, the album eventually went gold, and tracks like "Thunder" helped Boys Like Girls maintain a presence on the Billboard charts throughout 2008. Following the release of a DVD, Read Between the Lines, the band returned to the recording studio to commence work on a second album, which appeared in 2009 under the title Love Drunk. The record included a duet with Taylor Swift, and featured slick, radio-friendly production. Two years later, the band announced it had parted ways with bassist Donahue. In late 2012, Boys Like Girls released the Crazy World EP, the followed it up with the Crazy World LP. Both releases showed the group, now with new bassist Morgan Dorr, casting off any vestiges of emo-pop in favor of a new country-pop approach. ~ Corey Apar, Rovi