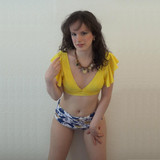 Lisa Schettner is a singer-songwriter of French, Czech and German descent. Due to her parents' profession Lisa has often changed her country of residence, attending schools in Bogotá, Vancouver, Vienna, and various regions of France. As a baby in Colombia, Lisa was imitating everything from nursery rhymes to Latino music. At 6 she started learning the piano, and added guitar lessons once in Canada.

At the age of 12 she was given her mother's vintage guitar, and began expressing herself through her own music and lyrics. Her knowledge of piano and vocal technique increased under the private tutelage of Hilary & Simon Carrington [The King's Singers]. Her first songs were recorded & produced in Vancouver in the studio of Ed Sadler. At present, Lisa records her music in her home studio in France, and works with several sound engineers such as Jim Kwan, Tyler Brooker, or the Latin Grammy award winner Thomas Juth. Having grown up in a multicultural environment Lisa spontaneously writes her music in English. Her main genre is folk with a touch of medieval or Celtic. Her other genres are: country, bluegrass, rock, pop, jazz. "Up High" is the name of Lisa's first single, and of her introductory EP. Accepted student at Berklee College of Music in Boston, Lisa has decided to pursue her career as an independent artist.