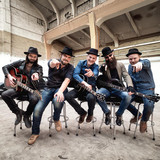 Rostock meets Nashville – Rock meets Folk, Country and Blues “It´s all about the relationship between song and vocal.” Fisherman´s Wife creates a unique tone and stands for a full and energetic sound. The band is rooted in between Traditional, Old School Country, Blues, Folk and Rock. Inspired by artists such as Chris Stapleton, Bruce Springsteen and many more country based singers. Fisherman´s Wife finds a new refreshing way to present the classic tone in a modern environment. It all started with the two brothers Arne and Eric Hinz in late 2015. During 2016 the rest of the members came together real quick to fulfill the band. After gigging a lot trough Germany during 2016 and 2017 they finally started to work on their first record. “Runaway” was born November 24th in 2017. “This record was special to us not only because it was the first one but mainly because we were really free in the working progress.” They produced the record in their hometown in Rostock. On top of that the mastering progress was done in Nashville. Fisherman´s Wife is a live band with catchy tunes who really knows how to communicate with the listeners. “We just want to get out there and play.” Band Members: Jacob Köhler (E-Guitar) Johannes Müller (Drums) Tim Zangenberg (Bass) Eric Hinz (Vocals, A-Guitar) Arne Hinz (Vocals, Blues Harp)