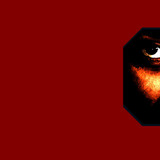 Funk artist Kahsay was born in Asmara, Eritrea and moved to Sweden as a child. Kahsay’s music career started when he and his childhood friend J.K Roberts (Impera) started their first band The Invaders. The band where inspired by KISS, Queen and Iron Maiden. Later on Kahsay expanded

his inspirational heroes to include artist like Prince, Bootzy Collins, James Brown, Earth, Wind & Fire, Kamelot, Marillion and Rick James. The demo of "Turn Me On" was written, recorded and mixed within five hours by Kahsay. When Kahsay’s studio partner