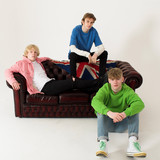 Rendacium’s raw, energetic, youthful spin on pop-punk is enough to make any angsty teenager feel a little more optimistic when life isn’t quite going their way. Hailing from the East Midlands, UK, since 2017, taking inspiration off of pop-punk legends blink-182 as well as the likes of Busted , YUNGBLUD and Green Day. Rendacium’s four-year journey has led them to embrace their natural rawness, lively-strong minded characters and has evolved their sound into what they now categorise as “British Pop-Punk”. After an incredibly successful year; selling out Dubrek Studios (Feb 2020), releasing singles Bad Guy , Love Me for a Day, Wrong Words and Every Little Thing You Do, being featured on BBC introducing and reaching no.4 on the iTunes Rock charts with Every Little Thing You Do as well as writing and recording their debut album Lies, Mood Swings and Bullsh!t. Rendacium began 2021 with a post to fans on social media quoting “we are all on this journey together. everything we achieve, we achieve together. there will always be people who try to control you and change you but don’t EVER let them define who you are. NEVER compromise who you are for the people that don’t wanna acknowledge your voice… here’s to a f**king awesome 2021. 🖤” With Lies Mood Swings and Bullsh!t out right now! Rendacium are taking pop-punk back to its roots with genuine and relatable lyrics, powerful guitar melodies, killer bass lines and a massive drum sound - THIS IS ONE BAND NOT TO BE MISSED!