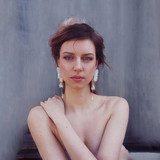 Lina Stalyte is a Lithuanian jazz-soul singer-songwriter currently living in Paris. She grew up in a little town called Mazeikiai. After psychology studies, she took a one-year break and went for a trip through Europe to find her future city to study jazz. After beautiful stays in Stockholm and Barcelona, Lina ended up in Paris effortlessly. She says that the city virtually invited her to stay. She has been accepted in several jazz music schools (Conservatory of Nadia et Lili Boulanger and Conservatory of Jean-Philippe Rameau). In May 2016, she releases EP - STALYTE with soul jazz influences. Lina presents songs from her album with 5 band members in CD release party at jazz club Sunset, Paris (2017). Lina is currently working on a compilation of acoustic covers and brand-new soul compositions. Stay tuned to be the first to know.