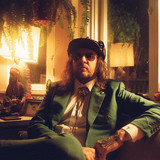 King Tuff is the neo-garage alter ego of multifaceted musician Kyle Thomas. Adopting the moniker in his teens as a play on his initials and the name King Tut, Thomas made his recording debut as Tuff in 2006, when he self-released an album via CD-R between playing with freaky folk revivalists Feathers and J. Mascis' stoner metal band Witch. His official full-length debut, Was Dead, arrived in October 2008 on the Colonel label, and introduced his anthemic lo-fi sonics to the masses. Touring with Hunx & His Punx and Witch, and releasing an album with his off-kilter power pop band Happy Birthday, put the Tuff project on the back burner until 2011, when a split single with Hex Dispensers arrived. A year later, he issued the stand-alone single "Wild Desire" via Suicide Squeeze before making the jump to the revered Sub Pop label. They released 2012's King Tuff, which found Thomas expanding his musical palette to show his fondness for retro-pop melodies. He returned in 2014 with third album Black Moon Spell, a fuzzy eruption of glam rock and funky garage pop produced by the Go's Bobby Harlow. It landed King Tuff on the Billboard 200. Worn down from years of touring and portraying what he saw more and more as a character, Thomas then made an effort to get back to basics, writing songs that would hold up to solo shows on acoustic guitar, and self-producing the material in his home studio. While more thoughtful, the still colorful and psychedelic The Other saw release in 2018. ~ Chrysta Cherrie, Rovi