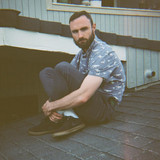 Exploring the emotional undercurrents of the every day, Oakland native Austin Prince makes music that hits listeners between the heart and gut. Creating music to fill his own need for connection and understanding, Austin is influenced by artists like Rex Orange County, and Frank Ocean. His self-released debut “Sadie” was placed on Spotify’s New Music Friday playlist and set the tone for what The Deli Magazine called his "minimalistic pop-meets-soul" sound. Kicking off his career as a solo artist supporting half•alive on their first national tour in 2018, Austin has since released a handful of singles, and made a splash in the Bay Area live music scene, performing sold out shows with Phony Ppl, Joan, Trevor Hall, Son Little and Inner Wave. Austin also Co-wrote “Tip Toes” and “Ice Cold” with half.alive. Austin loves his girlfriend, his dog Buddy and his four chickens: Shoe Lace, Flip Flop, Fast Orange and Teacake and he is dropping a new song with his identical twin brother, Ambrose Prince, on March 26th to kick of the first of 6 new singles to be released in 2021.