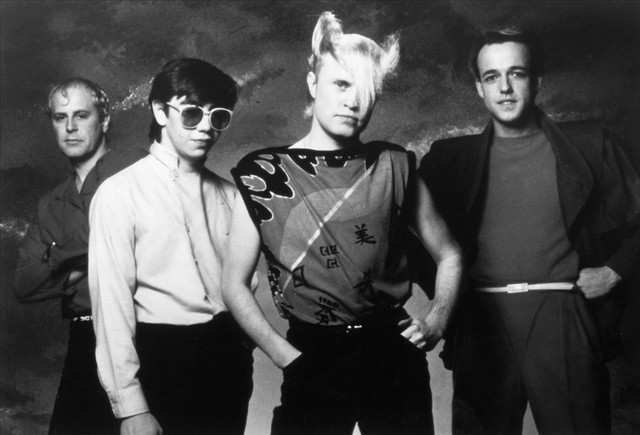 A Flock Of Seagulls

Featuring A Flock Of Seagulls

Best known for their 1982 hit "I Ran (So Far Away)," A Flock of Seagulls' reign as a Top 40 act, while brief, established them as one of the definitive bands of the new wave era. Growing out of the stylish new romantic movement, their combination of lush synths, textured guitar, and a sleek dance-pop landed them on the U.S. Hot 100 four times in all. Despite often being referred to as a one-hit wonder, they charted twice as many times in their native U.K. as in the U.S. between 1981 and 1985, including with the Top Ten hit "Wishing (If I Had a Photograph of You)." After their fourth album, 1985's Dream Come True, failed to chart, they briefly disbanded, but regrouped with a frequently shifting lineup behind leader Mike Score and toured primarily as a nostalgia act for decades to follow. Hairdresser Mike Score (lead vocals, keyboards) formed A Flock of Seagulls with his brother Ali (drums) and fellow hairdresser Frank Maudsley (bass) in 1980, adding guitarist Paul Reynolds several months later. Bill Nelson's Cocteau Records label issued their first song, the stand-alone single "(It's Not Me) Talking," which reached number 78 on the U.K. singles chart in 1981. The band's debut EP, Modern Love Is Automatic followed quickly on the same label, and its lead track, "Telecommunication," became an underground hit in Euro-disco and new wave clubs. A Flock of Seagulls signed a major-label contract with Jive by the end of the year, and their eponymous debut album appeared in the spring of 1982. It was their third single and first with Jive, "I Ran (So Far Away)," that brought them out of the clubs and into heavy rotation on MTV. Featuring shots of the band and Score's distinctive winged hairstyle, the song's music video became a staple of the summer of 1982, and "I Ran" climbed into the American Top Ten, taking their debut album along with it. The follow-up single "Space Age Love Song" also charted, peaking at number 30. Meanwhile, in the U.K., "I Ran" just missed the Top 40, but "Wishing (If I Had a Photograph of You)" reached number ten later in the year; in the States, that single became a Top 40 hit in 1983. "Wishing" was taken from the group's second LP, 1983's Listen, which landed in the Top 20 in the U.S., the U.K., and Canada, among other countries. The band had their final U.K. Top 40 hit in 1984 with "The More You Live, the More You Love" from 1984's The Story of a Young Heart, which reached number 30 on the album chart. The song and LP fared slightly less well in the U.S., charting in the 50s and 60s, respectively. Reynolds left soon after and was replaced by Gary Steadman; the band also added keyboardist Chris Chryssaphis. Still crafting club-minded synth pop, the new lineup was showcased on 1986's Dream Come True, which failed to chart, though the single "Who's That Girl (She's Got It)" made an appearance in the U.K. Top 75. Shortly after its release, the band broke up, though Score assembled a new lineup of A Flock of Seagulls in 1988, releasing the single "Magic" and touring the U.S. the following year. The song was eventually included on the 1995 album The Light at the End of the World, which saw Score backed by Ed Berner (guitar), Dean Pichette (bass), and A.J. Mazzetti (drums). More lineup changes ensued as the band reappeared with a cover of "This Used to Be My Playground" for the 2000 album The World's Greatest 80s Tribute to Madonna, on a 2003 episode of VH1's Band Reunited (that featured all the original members), and on a 2004 tour. Over the next ten years, A Flock of Seagulls continued to perform at festivals, charity events, and on '80s-themed summer tours. In March of 2014, Mike Score released the solo album Zeebratta, and in 2018, A Flock of Seagulls returned with their first studio album in over two decades. Titled Ascension, their sixth LP included 11 orchestrated versions of their '80s tunes performed with the Prague Philharmonic Orchestra, along with one original song. ~ Marcy Donelson, Rovi