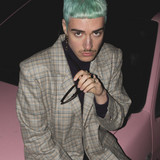 The project CHAiLD was officially created in April 2019 by Adriano Lopes Da Silva, a young and uprising singer-songwriter based in Liverpool, originally from Luxembourg. CHAiLD comes up with a very own pleasing style of Pop. His song Sick Water which features Maz, hit national radio charts for more than 11 consecutive weeks, peaking at Top 10. He combines the organic aspect of songwriting with modern, atmospheric and contemporary sounds. Through his unique soothing voice and his moody melodies, the young singer- songwriter takes the listener instantly in his melancholic universe, where he transforms the most negative feelings one can have into beauty and art. Live, the artist is accompanied by his session musicians. Most recently CHAiLD supported Dean Lewis in Den Atelier (LU) in 2019 and Mahmood at Rockhal (LU) in 2019. He will performing at Sonic Visions Festival hosted by Rockhal (LU) and his first headline Show “Artificiality” in Rotondes (LU) in November 2019.