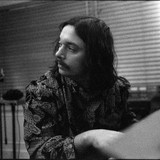 Hailing from the East Coast, the Los Angeles-based Michael Collins (ringleader of the band Drugdealer) began making music after leaving art school to ride trains across the United States. After he returned east to Baltimore, he began experimenting with abstract sound collage and other forms of experimental music. The result would be the seminal Bong Voyage under the nom de plume Run DMT. He went on to make another album Dreams, followed by The Bardo Story, before establishing the the R&B duo Silk Rhodes with Sasha Desree. In 2013, Collins decided to forgo his experimental exercises in favor of teaching himself how to write songs in a more traditional sense. Collins, who had never played an instrument, and had no “real” musical training, decided to approach the act of songwriting from from the perspective of a listener. Over the course of three years, Collins meticulously crafted what would become The End of Comedy, the debut album by Drugdealer. Created in open collaboration with the likes of Ariel Pink, Natalie Mering (Weyes Blood), and Jackson MacIntosh (TOPS), amongst others, The End of Comedy found Collins eschewing abstract drones for a more introspective, lucid take on songwriting that delighted critics and listeners alike. Picking up where The End of Comedy left off, Raw Honey finds Collins reducing, reusing, and recycling the traditional fabrics and threads of pop music, and weaving them into something both contemporary, reverential, and timeless.