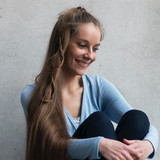 Amalie Skriver is an award-winning singer-songwriter from Copenhagen. As a young Christian musician, she writes about topics that shine a light on life's many questions, as well as a search for purpose in life which is something many of us are familiar with. With several nominations and awards in international songwriting competitions, Amalie Skriver has gained recognition for her catchy melodies and great arrangements . In 2018 Amalie was the winner of the Singer/Songwriter Category in the UK Songwriting Contest with her catchy single Nothing to Say.

The song was examined by expert music industry judges who have worked closely with such artists as Sting, Paul McCartney, Elton John, Kylie Minogue, Robbie Williams, Oasis, Britney Spears and many others.   Amalie was also a nominee in the International Songwriting Awards 2018 for Female Singer/Songwriter with Nothing to Say. In 2019 Amalie played a live show with the Danish singer/songwriter, Sara Grabow who's also Amalie's teenage idol.   Since 2011 Amalie Skriver has been active releasing four EP's and three single releases as well as playing live shows with her band. With a vocal that easily moves into people's hearts, she was also compared several times with singer/songwriters such as Kate Bush, Sarah McLachlan and Tori Amos. On stage she is accompanied by her childhood friend, the cellist and backing singer, Rebecca Cecilia Kousgaard, drummer Mikkel Mouritsen and guitarist Anders Tuxen. Lyrics: www.amalieskriver.dk