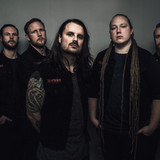 Kill the Kong is a Swedish seven-man strong metal/hardcore outfit formed in 2015. Built on percussion-based grooves, aggression and "in your face" live shows, the band quickly got recognized as a force to be reckoned with when releasing their debut single 'Caged' during the summer of 2015. After touring around Sweden in 2015, Kill the Kong entered Studio Radionika to record their full-length debut. The self-titled album, released on February 29th 2016, received a warm welcome, both by fans, critics and on social media and made sure to put Kill the Kong on the Swedish metal map. In the beginning of 2017, Kill the Kong signed a record deal with GAIN / Sony Music (Avatar, Europe, Hardcore Superstar), which lead the band to, once again, enter Studio Radionika. This time to record their sophomore album, 'COLOSSUS', which dropped worldwide on November 24th through GAIN/Sony Music, followed up by a German tour. In early 2019, the band parted ways with vocalist Sebastian. Kill the Kong are currently working on their third studio album which will be released in 2020. ‘Interstellar’ was the first glimpse in a wave of new music, and the first song featuring their new second lead vocalist Dennis "Kare" Andersson. It also shows off a new side of Kill the Kong in a strive to constantly develop and create variety in their art and music. In early 2020 the band signed a worldwide record deal with American based label Seek and Strike (Upon a Burning Body, Orbit Culture).