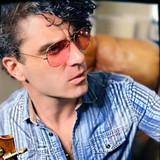 OLIVER PIGOTT ​is a singer/songwriter, musician and actor. He's written hundreds of songs in his career, toured and recorded worldwide and acted on both stage and screen. Beginning with a BMG Canada publishing deal in 2002, Oliver's time in the entertainment business has seen him as frontman for projects of varying genres, from folk/pop to country, electronic, Americana, soul and hard rock. He's worked with industry luminaries like Nick Tauber (Thin Lizzy, UFO), Doc McKinney (The Weeknd, Esthero) and Dean McTaggart (Wynonna Judd, Amanda Marshall) and recorded in premier studios, including Abbey Road in London, England and CBC Studios in Toronto, Canada. He also appeared as a finalist, alongside his brother Sebastian, on the closing season of Canadian Idol. The two went on to perform and record internationally as The Pigott Brothers, writing songs for the CBC Gemini award-winning series Being Erica, in which Sebastian starred. Oliver's voice was also featured in the song "Elevator", from the hit Family Channel series The Next Step. He starred as a singer/songwriter in the feature film Lost Angels, which went on to win several awards including Best Feature Film Soundtrack and Best Original Score at film festivals across the USA. In 2017, he had the honour of being the featured vocalist at the War Memorial in Ottawa to commemorate the 100th anniversary of the Battle of Vimy Ridge. Oliver is one half of the Americana/Folk duo, LambLion.