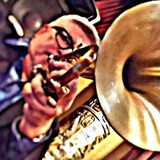 TRUMPET/FLUGELHORN COMPOSER ARRANGER CLINICIAN (and all around good guy) www.jimmanleymusic.com figures he had spent around

7,500 plus nights playing his trumpet around town in his hometown of St. Louis since the 70's “I think I’ve played almost every place in town under one circumstance or another” His recordings have gathered critical acclaim as well and have traveled all over the world. Jim’s forays into the stratosphere are musically exciting and unbelievable to his peers. “Jim can make his trumpet soar, pop, sizzle and purr –he can do it all!” ROSS GENTILE –WSIE 88.7 In the past few years he has branched out as a band leader, composer, and clinician. Jim has been featured as a guest soloist with many school bands across the country. He was a featured soloist at the annual Trumpet Party in Amsterdam in 2006 Jim’s group Horns in the House” was the opening act for the legendary Maynard Ferguson. Every year