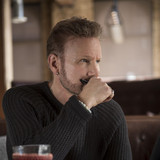 Corey Hart has sold over 16 million records worldwide by amassing 9 consecutive US Billboard Top 40 Hits, while scoring an impressive 31 top 40 singles in his native Canada (Including 12 – Top 10 Hits). He´s Grammy Nominated as well as an ASCAP, multiple Juno and Quebec ADISQ award winner. His iconic debut single, “Sunglasses At Night,”

was an international sensation propelling young Hart to the summit of the pop world. His brooding good looks and James Dean persona became larger than life during the 80´s -where he was regularly mobbed by frenzied fan adulation. His sophomore album “Boy In The Box” achieved Diamond status certification (1 million plus sales) faster than any other Canadian artist in history by spawning four hit singles lead by his classic “Never Surrender” which spent nine weeks at number one in Canada, winning “Single of the Year” at the Juno Awards in 1985. In 1999,following the birth of his third daughter ,Corey stepped away from his recording and touring career to raise his four children with wife Quebec chanteuse Julie Masse. In 2016, Corey was inducted onto Canada’s prestigious Walk Of Fame. In 2019 – Hart releases Dreaming Time Again, his first studio album in over 20 years.