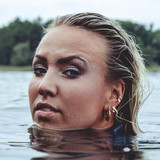 Emelie Cyréus is a 26 y/o singer from Stockholm, Sweden. She’s been singing her whole life but started working in the studio in 2013. Her first release was on Armada 2016. She’s featured on tracks by Magnificence, LIZOT, Tom&Jame and many more, on labels like Warner, Sony Music, Revealed Recordings, etc and been played on the radio in many countries, world wide.   She’s been supported by big names like David Guetta, Martin Garrix, Steve Angello, Hardwell, Tiësto, Armin Van Buuren and the list goes on. She's also already reached over 100 million streams on Spotify.  With Revealed Recordings’ own words of describing her, ”Equipped with a stunning vocal which is sure to garner attention”, Emelie is super excited about the future.