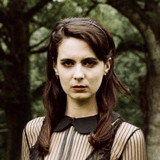 A series of incredible coincidences. A forgotten advert in a music magazine, a promising first rehearsal and then a serious bicycle accident. Weeks in the hospital, memory loss. Six months later, Cecilia and Adriano meet again, by chance. Their collaboration starts in a hall draped in red velvet, a set by David Lynch. Two solitudes join forces. They invent an alien flower as a name. They begin to outline their style: Dark Wave with an aerial voice, deep lyrics, not completely orthodox musical arrangements, pressing (heart)beat. Echoberyl is electronic / post-punk duo from Paris formed at the end of 2018 by Adriano Iacoangeli and Cecilia Dassonneville. Their music is influenced by some classics like New Order and Depeche Mode but also by soundtracks like "You and the Night" by M83, the atmosphere of David Lynch movies, the light voice of french 60s singer France Gall. Their first album, "Apparition" (2019), received good critical acclaim, getting them named "Band of the day" by Post-Punk.com and Prémo.fr magazines. Their sophomore album, "The Awakening of a Mutant Girl" (2020), is an homage to Sci-fi B-movies from the 50s and 60s and a concept album telling the story of a young woman discovering that she is a mutant. Eventually, the Aliens, who share her DNA, come to pick her up.