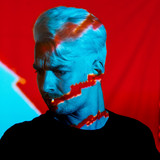 Alex Nauva is the frontman of the eastern Swiss post-punk band OGMH. With his solo project he creates his own take on contemporary electronic indie by experimenting with different genres. In 2017 he released his self-produced mini album China Girls which is a unique blend of techno and synthwave combined with his post-punk roots and lo-fi elements. Since then his fascination for synthesizers and drum machines grew so drastically that he released himself from his post-punk origins. This redefined Nauva’s electronic music and he shifted to focus on a more intimate approach to songwriting plus merging synthwave with dreampop and pop-hooks.