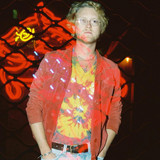 Ludvig The Band is a blissful mix of orchestral pop, progressive rock, folk and lo-fi indie. With a mixture of powerful and simple minimalism, Ludvig plays around with his strong and distinctive vocals, resulting in a fearless and genuine closeness. The music is characterized by catchy melodies and detailed arrangements. The textual nerve exudes seriousness, but also a charming honesty. On the new album, You Will Shine, Ludvig The Band returns to the debut album's orchestrated indie rock. Included are some of the rock elements found on the mini album Majestic Refugee which was released in the fall of 2019, among the more atmospheric tracks. You Will Shine shows the breadth of Truls Ludvig Johnsen's musical project. During this nine track album, we are served tunes that abruptly alternate between the vulnerable, the wondrous and the energetic.