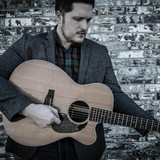 "Do you really believe that no one's looking out for us?" A question that speaks straight to the heart of the political atmosphere of the southern United States in 2016. "After such a lengthy break, I knew that I wanted to ask different questions with my music.. I wanted to focus on not just my immediate relationships, but my relationships with my work, with my country, with my spiritual life.. I wanted to focus on the decisions that people have to make when transitioning into adult hood... What are your dreams? What is the price you pay for following them?"- With a much broader vision, White has returned in 2016 with a series of singles releases that show tremendous growth as a writer, musician and producer- "For independent artists today, there is little choice but to become a jack of all trades... You want a video made? Learn to make a video.. You want to release music on a regular basis? Stop relying so much on others and learn the craft.. You're left with little choice but to take complete control over your musical destiny.." With a string of well received EP's and Album's, and evidenced by his 2016 production so far, there is little doubt that the next full length release from Brandon White will contain the well crafted lyrics and arrangements that many have come to expect from White and a whole lot more.