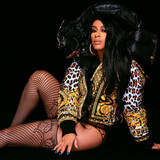 Born in Chicago and raised in roughest projects, rapper/songwriter Chella H, aka Jennifer LowEnd, turned the peril of a fatherless household ,teenage pregnancy & a mother battling drug addiction for the majority of her childhood into an escape through music. Chella began songwriting with the purpose of reaching her peers’ souls at a young age rather than to fit into a specific genre. Not long after tapping into her creative rescue, her brother went to prison, again leaving her without a man in the house. Chella survived, living her life on the streets, peddling drugs and boosting stores in her teens. Chella H’s realism, sense of humor and consistency have allowed her to gain attention as an independent artist, earning major support from all over the world. She recently launched a Chicago based podcast titled “Str8DropUncut” w co-host BoDeal which has been adding to her buzz as well. Chella is the street’s favorite not only for her relatable well-timed music but because she is the glowing underdog who has eclipsed obstacles to become more than music. And Chella, nor the streets, are shy about reminding you. Chella’s upcoming new single is titles “How Im Coming” produced by RioMacnificent. The visual is a for sure head turner. Her upcoming project “ABOVE WATER” is filled with a variety of hard hitting sounds combined with undeniable lyrics proving ChellaH is one of the most talented authentic song writing performers in the game.