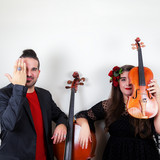 Violin - cello band that plays many different styles of music. Rock , classical , traditional , pop In their own unique and gushing manner, they blend Classical Music together with Heavy Metal and Traditional/ Folk Music with Rock... with rhythm, fierceness, sense of humour, percussions – drums and strings… wherever music can reach!

The result is magically “explosive”. The cello of Konstantinos along with Lydia’s violin, their view on the compositions of Iron Maiden, Handel, Queen, Vivaldi, Markos Vamvakaris and many more, where Lady Gaga meets Greek folk music and Abba the Pontic Greek songs, their personal compositions, electricity in contrast with the classical training of the two siblings, the influence of Christian and Byzantine chants, the musical surprises and the continuously new cover versions-arrangements they prepare, enchant all audiences, while the atmosphere becomes Bacchic- to say the least-, when their fingers touch the strings. They have performed at the Concert Halls of Athens and Thessaloniki, at the Odeon of Herodes Atticus and many other theatres, music stages, museums, festivals and have realized successful tours in Greece and abroad (Germany, Italy, Belgium, Cyprus, New York). As a new band that started its music career just in 2014-15, they have managed,with their subversive entertaining records and their sold out performances,to rise to the occasion in several circumstances, next to leading foreign bands of the kind attracting a great number of fans