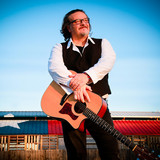 Stefano "Cisco" Bellotti was born in Carpi, Italy, on July 29, 1968. He was dubbed "Cisco" after a San Francisco T-shirt he religiously wore while playing soccer as a boy. From his early years, Bellotti was passionate about music and Italian song, inspired by artists like Francesco Guccini, Lucio Dalla, and Fabrizio De André. Though educated as an electrician, Bellotti plunged headfirst into the music world after graduation at the age of 17. The sounds of Deep Purple and Led Zeppelin would catch Bellotti's attention in the years to come, but his interest in the Celtic-influenced music of the Pogues would chart his course to international success. In 1991, Bellotti joined a group called the Modena City Ramblers, a small local Irish folk music group. In the tradition of artists like the Waterboys and Bob Dylan, the Ramblers started writing material that entertained and stirred sentiments of resistance. Over the course of their 13-year career, the Ramblers drew from diverse influences including the music of Latin America, Eastern Europe, and Africa, sharing their leftist fan base with politically conscious international artists like Manu Chao. In 2005, Bellotti set out to pursue his solo career apart from the Ramblers. A short time later, Cisco released his first record as a solo artist, entitled Lunga Notte, which was well-received by the international music community. ~ Evan C. Gutierrez, Rovi