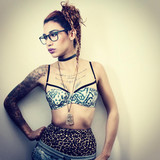 Camila was born in Brazil and moved as a toddler to Boston, Ma, where she grew up and got her start in the music scene. “I've been living in LA for a couple of years now and although I'm loving the experience, at the end of the day I'll always be an east coast girl” She says she has loved writing and singing for as long as she can remember. “At 5, I was the girl shushing everyone through a Barbie karaoke microphone so I could perform my renditions of American songs I never knew the right lyrics to.” By age 8 Camila took an interest to writing poems and eventually started turning them into songs. “I was quiet about it for a long time, I was nervous about how people might react. I'd never taken classes, but in private I learned to play the keyboard by watching videos." She was introduced to producer Mike Cip during her high school years, and it was there at Split2nd Entertainment Studio that she began her journey into becoming a seasoned musician. Mike became a friend and mentor, and was incredibly supportive of Camila’s work. That same studio is where she met Justin Mercurio, a Boston bred producer/artist who also became a good friend and music partner. Currently Camila is working on releasing an array of singles varying from hard hitting hip hop hybrids to Brazilian funk crossovers to pop hits thats are already making their way across Spotify and leaving their mark on the web as well as on LA's up and coming music scene.