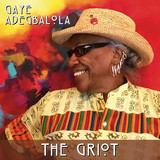 Gaye Adegbalola is best-known to blues fans as the flamboyant, flashy, very funny frontwoman for Saffire, The Uppity Blues Women. But on her debut release as a solo artist for Alligator Records, she's in fine voice, accompanied by some great players and, true-to-form, pushing into new thematic ground in her lyrics. That's why Adegbalola is a breath of fresh air on the contemporary blues scene, and now that Saffire have slowed their pace of touring, with any luck, Adegbalola will be on tour in a town near you. Bitter Sweet Blues released in 1999, is a brilliant album, and this former science teacher from Fredericksburg, VA takes the blues form in plenty of new directions, with sassy, funny tunes like "Big Ovaries, Baby," and "The Dog Was Here First." The album showcases eight of Adegbalola's original compositions, as well as songs by Keb' Mo', Smokey Robinson, Bessie Smith, Nina Simone, and Gertrude "Ma" Rainey. Born in 1944 in Fredericksburg, VA, Adegbalola was raised by civic/community activist parents who had a deep love for music. Her father, Clarence Todd, was the first African-American school board member in Fredericksburg who played jazz on the side. Her mother would bring home records from her job at the Youth Canteen. Adegbalola took up flute in high school, then went on to college in New England, where her fascination with blues, gospel, and jazz took hold, listening to records by Etta James, Nina Simone, Ike & Tina Turner and fellow Virginian Ruth Brown. It was the late Simone who led Adegbalola to the recordings of Bessie Smith, and the discovery was a major turning point, as she finally understood the blues-based roots of jazz. While in college, she began learning her first few tunes on guitar, and after college, she moved to New York City where she became active in the Black Power movement and changed her last name to Adegbalola. After giving birth to her son in 1969, she returned to Fredericksburg in 1970 where she worked with a theater group at night and as a bacteriologist by day. She took a job as a junior high school science teacher and did that until 1987. She was awarded "Virginia State Teacher of the Year" in 1982, and several years later, she formed a blues band with her friend and guitar teacher, Ann Rabson and bass player Earlene Lewis. The trio, Saffire, the Uppity Blues Women, released their first album on cassette on their own label in 1987, and the following year, they hit the road full-time. The group went from playing clubs and coffee houses around Fredericksburg to playing theaters and festivals around the U.S., Canada, and Europe. Adegbalola's song, "Middle Aged Blues Boogie," won a W.C. Handy Blues award for Song of the Year in 1990. Despite a brush with illness in the late '90s, Adegbalola, ever the fighter, has continued to make thoughtful, insight-filled music and continues to tour. Clearly, her years spent teaching in Fredericksburg have served her well, as she's taken the lessons she learned in the classroom and transferred

them to the nightclub and festival stage. Adegbalola's power, passion, and humor as a blues historian and performer is best appreciated at one of her live shows. Nonetheless, Bitter Sweet Blues is one of the most original blues albums of the '90s. ~ Richard Skelly, Rovi