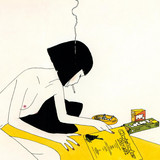 Lamp was formed in 2000 by Nagai Yusuke (vocals), Sakakibara Kaori (vocals), and Someya Taiyo (guitar). They have released a total of eight albums to date, beginning with 2003's "Soyokaze Apartment 201" leading up to their latest, 2018's "Her Watch". In addition to touring their home country of Japan, they have performed across major cities in China, Taiwan, Hong Kong, South Korea, and Indonesia as they continue to receive widespread acclaim both domestically as well as overseas.   Drawing influence from Brazilian music and Western pop of the 60's and 70's, it can be difficult to categorize Lamp under any one genre. Their music could be described as sounding dreamy and ethereal; experimental yet refined; soaked in melancholy and nostalgia. In their songs, one might hear echoes of MPB, AOR, soul, and soft rock, all seamlessly woven together against the backdrop of a Japanese pop aesthetic. Lamp are truly one-of-a-kind — a unique band whose sound possesses both an elegant complexity together with a delicate simplicity.