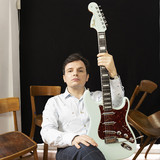 Julian Rybarski delivers guitar pop with a big helping of catchy hooklines. Sometimes with a distinct indie feel, mostly danceable and always hummable (hey, go learn the lyrics, join in!), Julian’s music is brand new while feeling as if it should always have been here. And now it is here, so enjoy! Here’s a bio for those who like words: Julian Rybarski only wanted to play the electric guitar. But music demanded more from him: He became the default singer in all his early bands while also playing lead guitar, because no one else wanted to sing. Driven by a strong urge to merge multi-part harmony singing with eclectic guitar work and strong pop hooklines, he wore out a succession of bands also learning a third musical trade: Songwriting. Eventually enrolling at university to study music (and theatre and philosophy, because inspiration and such), he emerged with a swing-pop-rockabilly band. He played in many bands after that, also producing and conceiving musical formats for festivals, working with artists like Elvis Costello, Ron Sexsmith, Rickie Lee Jones, Bill Frisell and hundreds more. After graduating, he founded a girl’s music academy, played with musical theatre projects and other acts, branched out into production, set up a record label, and recorded two albums with Ryberski, a first step back towards his greatest musical love: Well-written and well-performed pop songs. After winning several awards, Julian 2018 finally decided to release music under his own name.