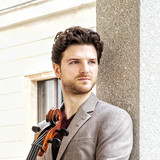 Gabriel Schwabe is a laureate of three of the most prestigious cello competitions: the Grand Prix Emanuel Feuermann in Berlin, the Concours Rostropovich in Paris and the Pierre Fournier Award in London. As a soloist he has worked with important orchestras such as the London Philharmonia, the Radio Symphony Orchestra Berlin, the NDR Radio Philharmonic, the Royal Northern Sinfonia, the DSO Berlin, the Malmö and Norrköping Symphony Orchestras and the NCPA Orchestra Beijing with conductors such as Marek Janowski, Eivind Gullberg-Jensen, Dennis Russell-Davies, Cornelius Meister, Michael Sanderling, Marc Soustrot and Christian Kluxen. In chamber music, Gabriel Schwabe regularly performs with artists such as Isabelle Faust, Christian Tetzlaff, Lars Vogt, Kirill Gerstein and Jonathan Gilad. In 2010 he gave his recital debut at London’s Wigmore Hall. He is a regular guest at festivals such as the Jerusalem Chamber Music Festival, Kronberg Festival, Amsterdam Biennale and Schleswig-Holstein Music Festival. Gabriel Schwabe was born in Berlin to German-Spanish parents. He studied with Catalin Ilea at the University of Arts in Berlin and with Frans Helmerson at the Kronberg Academy and recieved further impulses from Janos Starker, Gary Hoffmann and Gidon Kremer. ​​He is a cello professor at the HfMT Cologne and the Conservatorium Maastricht. He is married to violinist Hellen Weiß and plays a cello by Giuseppe Guarneri (Cremona, 1695-97).