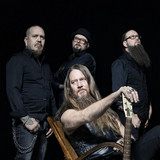 Kotiteollisuus are a popular Finnish heavy metal band that emerged in the mid-'90s on the Megamania label and rose to chart-topping success after the turn of the century. Formed in 1991 in Lappeenranta, Finland, and originally called Hullu Ukko ja Kotiteollisuus (later shortened to just Kotiteollisuus), the band made its recording debut in 1993 with a pair of self-titled demo tapes. The original band lineup featured on these demos included Tomi Sivenius (guitar, vocals), Jouni Hynynen (guitar), Janne Hongisto (bass), and Jari Sinkkonen (drums). By the time Kotiteollisuus made their official debut, Hullu Ukko ja Kotiteollisuus (1996), the first of their many releases on Megamania, Sivenius had been replaced by guitarist Aki Virtanen, who himself would depart from the band by the time of its follow-up album, Aamen (1998), which found the band reduced to its longstanding core trio lineup of Jouni Hynynen (guitar, vocals), Janne Hongisto (bass), and Jari Sinkkonen (drums). Kotiteollisuus' third album, Eevan Perintö, followed in 1999, and then in 2000 Tomusta ja Tuhkasta became the band's first to chart, breaking into the Finnish Top 40. The band's next album, Kuolleen Kukan Nimi (2002), proved more popular, reaching the Top Five of the Finnish albums chart. Even more popular was Helvetistä Itään (2003), which went all the way to number one and lodged 41 weeks overall on the albums chart; plus, the title track became a number one hit single while the album itself won a 2003 Emma Award for Best Metal Album. Kotiteollisuus' popularity continued with their next album, 7 (2005), another chart-topping success, as well as subsequent releases including the chart-topping hit single "Arkunnaula" (2006), the follow-up album Iankaikkinen (2006), which charted number two, and the three-CD retrospective compilation Murheen Mailla 1996-2007, which charted Top Ten. ~ Jason Birchmeier, Rovi