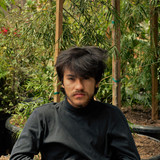 Once upon a time in Oxnard, when Los Retros used to be known as Retrospect, there were 2 young fellows know as Chai and Mauri. Both these young chaps had come up with a variety of tunes in Mauri's living room shortly after high school. Both being from the same school, chemistry between each other was first developed through jesting on campus and cracking jokes which lacked so much context. But it kept the rooms filled with nonsensical laughter for how ridiculous and relevant their jokes were. After departing from teenage prison at a highschool we cannot name, the band had adopted a couple members over the course of the band's history. Now those that still stand are Chai, Brayan, Lupe, and Mauri. This project contains a few of the many tracks that were once on Soundcloud, but then deleted by an online burglar as soon as the band had gained more reknown. Retrospect later became Los Retros to seal a more unique name in the music field, and also to avoid a traffic of people with the same name. The project Retrospect, is a throwback which once served as a spark plug for what is to come in the band's next releases. We hope you enjoy your ride back to 2017 with this one.