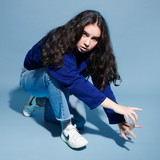 Born out of a bedroom, the project Francis of Delirium was created by solo artist Jana Bahrich (Vancouver, CA) who later invited drummer/producer, Chris Hewett (Seattle, USA) to form an indie rock band, based in Luxembourg. Uniquely synthesizing grunge and folk to create an evocative and vulnerable experience, Francis of Delirium gently guides the listener to look inward; allowing for a space that encourages growth. With the recent addition of bassist Jeff Hennico (Luxembourg), Francis of Delirium delivers a powerful indie rock sound that supports Jana’s high energy vocals and her genuine passion to connect with each member of the audience. Francis of Delirium has since moved to the basement, recording at Chris' home studio, Sonic Temple Studios. Following up their debut EP "All Change", the band is in the process of releasing their second EP "Wading" out April 9th. Stand out single "Let It All Go" has garnered the band support from the likes of NPR, Stereogum, The Fader, Line of Best Fit, Paste Magazine, Consequence of Sound, DIY Magazine, Clash Magazine, BBC 1 Radio and more. "Catchy and impassioned indie rock" - Stereogum "We're in for something very good" - The Fader "[Bahrich] has a confident delivery for someone so young. Great EP" - NPR's All Songs Considered