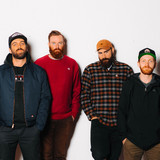 Four Year Strong have carved out their own niche in the music community by merging the infectiousness of pop-punk with the aggression of hardcore and never shying away from breaking with creativity-limiting conventions. This is evident on the band’s fifth full-length Brain Pain, a collection of songs that retains the qualities of the band that fans have grown to love while pushing forward the band’s effort to continually redefine their sound. “One thing we’ve struggled with in the past is writing in a way that’s personal to us that our wide range of fans can find a way to relate to as well,” vocalist/guitarist Dan O’Connor explains. “On this record we really tried to find the thing that connects us to our younger fans or the people who have been listening to us for a long time who still see us as younger kids despite the fact that we’re now in our thirties.” The band -- which also features vocalist/guitarist Alan Day, bassist Joe Weiss and drummer Jake Massucco -- began conceptualizing the ideas for Brain Pain two years ago and for the past year-and-a-half have focused on bringing those thoughts to fruition. “We probably had 40 song ideas to get the creative juices flowing and some of those grew into the songs that are on this record,” Day explains, adding that it was important for the group not to rush the album or go into it with any musical or logistical limitations.