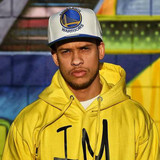 Brandon “Nocturnal” Murphy is a Hip-Hop artist out of New Haven, CT. Nocturnal has been on a steady rise throughout CT building up his own name as well as his fellow members of MGang (Pseudo Black &amp; John X Smith) who frequently feature on his projects. In two years he’s totaled almost 150k streams on SoundCloud including his highest streamed track ‘Letter to Jermaine’ a tribute to influential Hip-Hop legend J. Cole, which has currently reached 16k streams. Nocturnal has opened and shared the stage with fellow artists: Dave East, DMX, Jadakiss, Fabolous and more. In May 2018 he released his first official single ‘Car Ride Home’ and is featured on CT producer Devilsbelt’s latest release with his track ‘Letter from Prison’. In June 2018 he became Verified on Spotify and Apple Music. For Booking/Features email: mgnocturnal@gmail.com