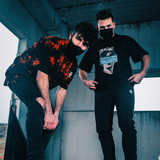 Pizza Pasta e Mozzarella Pietro and Andrea are two cousins who have been linked by many common passions and interests since they were children. They always met up to spend afternoons playing video games and listening to music (something passed down from their fathers) and at one point one of them bought a small DJ console. At first it was just one of many pastimes for them, but there was something special about it. Over the years this hobby became more and more concrete until the duo decided not to limit themselves to mixing records but to create them. From then on it took time, the first productions were unsuccessful, but then in 2018 came the first contract from a small label and so they landed in the music market. At the same time they decided to devote themselves totally to music, they both started studying as Sound Engineers, and set up their first home studio, a space just for them and their music. 2020 was the breakthrough year, the duo signed big contracts with some of the biggest labels of the moment. They currently have tracks out on: LithuaniaHQ, Black&White, Soave, Magic Records, Future House Cloud, Reload Music.