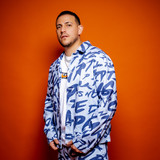 Chris Jedi is a renowned composer and record producer from Puerto Rico, who is very well known for his collaborations with the genre's heavy hitters like Daddy Yankee, Wisin & Yandel, Don Omar, Anuel AA, Ozuna, De La Ghetto, Cardi B and more! Born on September 19, 1989 in San Juan, Puerto Rico, Chris initially wanted to be a singer. His first steps as a producer were under the wings of Luny Tunes, who he admires. From there on, he has become one of the Latin music scene's top producers Aside from acting behind-the-scenes as producer, he has also released music as the main artist, including his hit Ahora Dice with J Balvin, Ozuna and Arcangel and is getting ready for a new chapter of music coming soon!